How SloCat Was Born

Kids in Pender Harbour used to get picked up by the ferry in the morning to get to school.

Why? The best way to get around was by boat and still is today. It’s 1999 and the Pender Harbour Chamber of Commerce is running the Pender Harbour Ferry, called the “BA Farmer”. After two years of making virtually no progress running the boat, long time mariner Paul McKimm was asked by former Area A Regional Director, John Rees, if he could turn the troubled tour outfit around.

He agreed to operate the boat for a season (in those days, that meant July and August). At the end of the year, he purchased the boat from the Chamber, which helped them recoup some losses and most of all, free them from the responsibility.

It was 2001 and Paul renamed the boat “SloCat”, but why? The Fast Ferry Scandal, also referred to as the “FastCat Fiasco” had now become major headline news.

The provincial government at the time decided to use the Crown Corporation BC Ferries to advance the provinces shipbuilding industry by designing a fleet of high-speed, catamaran style passenger/vehicle ferries. The catamarans were intended to improve ferry service between the mainland terminal of Horseshoe Bay and the Vancouver Island terminal at Departure Bay.

Three ships were built between 1998–2000 and were given the names PacifiCat Explorer, PacifiCat Discovery and PacifiCat Voyager. The vessels were designed to travel at 37 knots (68 km/h) and hold 250 cars and 1000 passengers. The hulls of the vessels had slightly different murals depicting a cougar. But the ferries had problems right from the get-go!

They were delivered 3 years behind schedule at double the budget, totaling $463 million. They used a lot of fuel; breakdowns and sailing cancellations were common because of debri being sucked into the jet drive impellers. The ships also created a wake, which apparently damaged waterfront wharves and property in coastal areas along the routes. Passengers on vehicle decks often complained that the air was uncomfortably warm, either from the heat of the vessel engines or lack of air circulation. Others complained because there was virtually no outside deck space and the ships’ interiors felt cramped compared to the existing ferries.

Loading also took longer than the older ferries because of balancing issues. In March 24, 2003, the fleet was auctioned off for $19.4 million to the Washington Marine Group. Paul McKimm couldn’t resist the opportunity to name his new boat after the laughing matter.

Hence, “SloCat” was born! He grew the business over the next 12 years on the water, from an average of 50 riders a year to over 1000. He always felt that the SloCat was one of the community’s largest fixtures and that it truly belonged to them.

He gave free tours every year to elementary students and took part in the yearly parade and the April Tools celebration. He provided transportation for music festivals and always left guests with a taste of the harbours history and appreciation of its unique setting.

The Painted Boat Resort was coming online and it became clear he needed to offer more service. Beyond daytime tours, passengers now had the option to go for a ride in the evening on Sunset Cruises. However, after a dozen years of hard work and hard play, he had enough.

Paul would often refer to its nickname “Venice of the North”. As the local economy blossomed in 2008, Paul expanded his fleet with another boat, “SloCat II”.

The business changed hands during the winter of 2013 and Mark Brezer took the wheel. Mark has a well-rounded education and background in tourism and entertainment. His passion for learning led him all over the world and, since 2005, the Sunshine Coast has been home.

Not only is Mark a passionate musician and performer, but a radio personality at the local radio station. He brings a warm sincerity to everything he does and loves meeting new people and taking on new challenges. Ultimately, Mark intends to keep the SloCats operating in the same spirit as they have been, like a hub that connects all points of the harbour.

Slocat 3 was added to the fleet in the summer of 2018. The brand new Tri-toon is a top-of-the-line luxury vessel that provides guests with an even better platform for experiencing Pender Harbour from its best angle… the water! 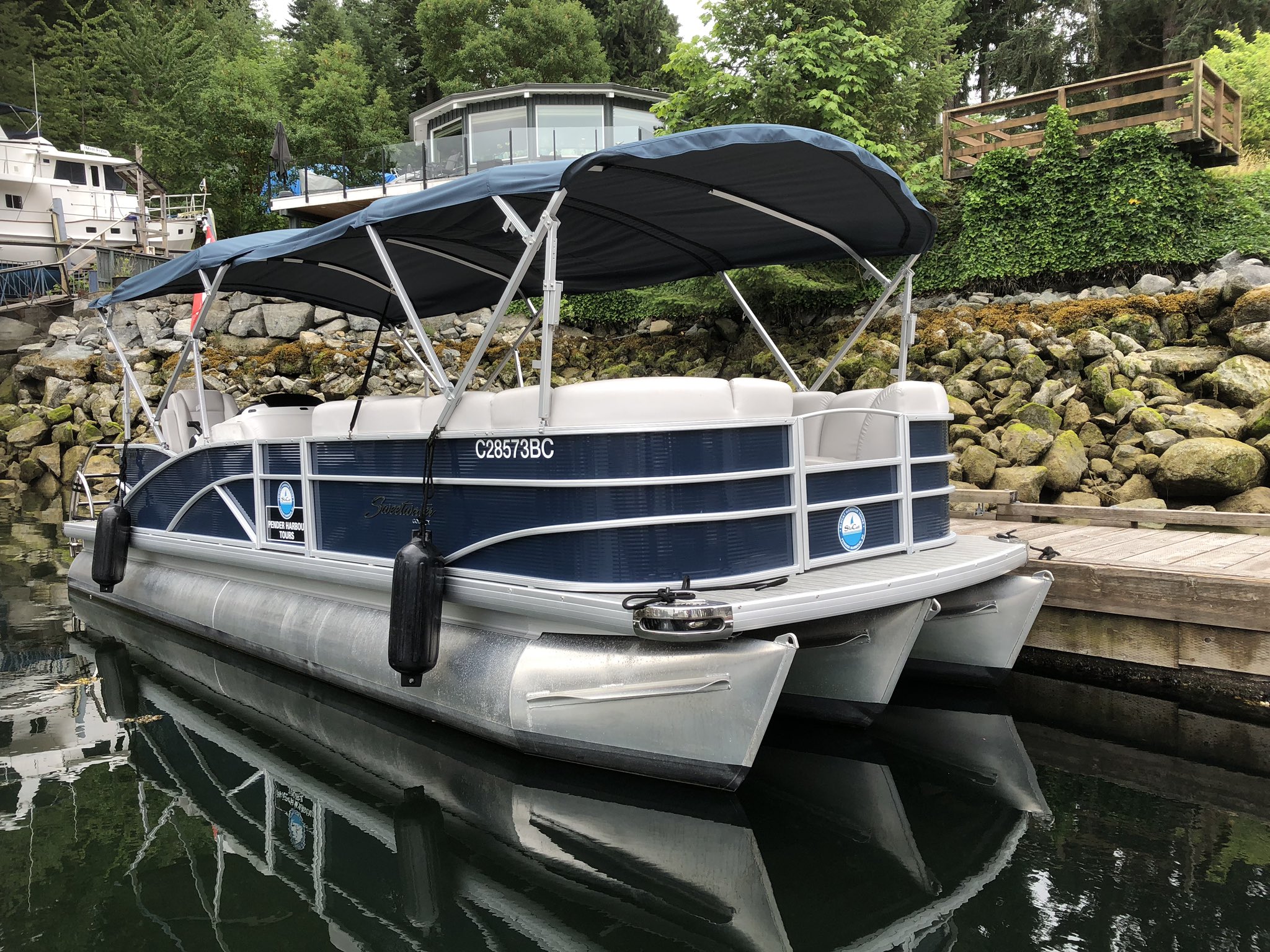